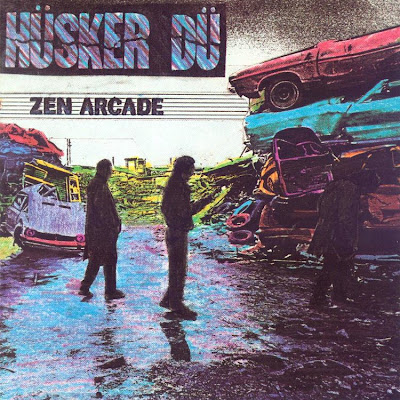 "In many ways, it's impossible to overestimate the impact of Hüsker Dü's Zen Arcade on the American rock underground in the '80s. It's the record that exploded the limits of hardcore and what it could achieve. Hüsker Dü broke all of the rules with Zen Arcade. First and foremost, it's a sprawling concept album, even if the concept isn't immediately clear or comprehensible. More important are the individual songs. Both Bob Mould and Grant Hart abandoned the strict 'fast, hard, loud' rules of hardcore punk with their songs for Zen Arcade. ..."
allmusic
Wikipedia
BBC
FROM THE VAULT: Husker Du – Zen Arcade
Rolling Stone: 33, Hüsker Dü, 'Zen Arcade'
YouTube: Zen Arcade (Private Remaster UPGRADE)
YouTube: Chartered Trips, Something I Learned Today, Broken Home, Broken Heart, Pink Turns To Blue