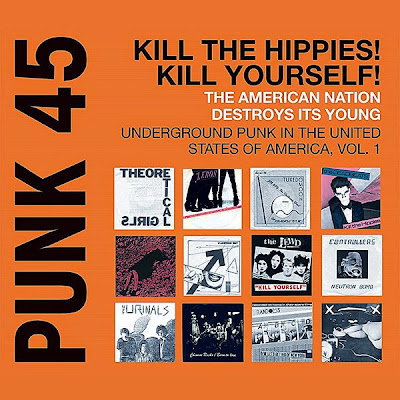 "While punk essentially began in New York in the mid ’70s, with the Ramones, Blondie and Television, its lineage dates back to 1960s garage rock, and a huge number of American bands were to prove significant in its birth. New York gave rise to the Velvet Underground in the late ’60s and the New York Dolls in the early ’70s. Detroit produced the definitive proto-punk groups, the Stooges and the MC5. In Cleveland, Ohio, the Electric Eels (whose violent music would remain unreleased until well after the birth of punk) would kickstart a whole scene of proto-punk and punk bands, including Rocket from the Tomb, Pere Ubu, the Dead Boys, the Mirrors, the Styrenes and more."
PUNK 45: The Roots of Underground Punk (Video)
Stuart Baker's top seven punk record sleeves (Video)
addicted to noise
Turn Table Lab (Video)
amazon: Punk 45: Original Punk Rock Singles Cover Art
Posted by Bill at 7:01 PM