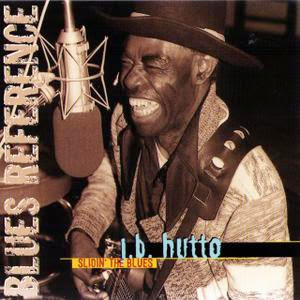 Wikipedia - "J. B. Hutto (April 26, 1926 – June 12, 1983) was an American blues musician. Hutto was influenced by Elmore James, and became known for his slide guitar work and declamatory style of singing. He was inducted into the Blues Hall of Fame two years after his death. ... In Chicago, Hutto took up the drums and played with Johnny Ferguson and his Twisters. He also tried the piano before settling on the guitar and playing on the streets with the percussionist Eddie 'Porkchop' Hines. After adding Joe Custom on second guitar, they started playing club gigs, and harmonica player George Mayweather joined after sitting in with the band. Hutto named his band The Hawks, after the wind that blows in Chicago."
Wikipedia
allmusuc
J. B. Hutto
Dave Weld remembers J.B. Hutto
amazon
YouTube: That's The Truth, Pretty Baby, Combination Boogie, Pet Cream Man, Married Woman Blues, Lullebelle's Here, Summertime, The New Hawk Walk / Black's Ball, My Heart Is Achin' To Love You, Too much alcohol, Somebody Loan Me A Dime, Precious Stone
Posted by Bill at 3:40 PM