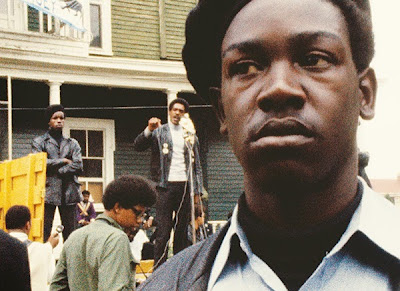 "In 1968, Agnès Varda was living in Los Angeles with her husband, director Jacques Demy, who was there to begin filming his first Hollywood film, Model Shop (1969). Although initially hesitant about living in the United States, the couple quickly became caught up in the wave of dissent sweeping the country in the late 1960s. Indeed, amid the finger pointing in France about the perceived failure of the events of May ’68 to bring about revolution, many members of the French intelligentsia looked across the Atlantic for alternative models for political change. Varda became part of a growing contingent of French artists and intellectuals, including sociologists Edgar Morin and Jean-François Revel, and writer Jean Genet, who were attracted to the ways in which cultural revolt, social criticism and political contestation were intertwined in the United States. ... The Black Panther Party (BPP) embodied this new mixture of cultural and political rebellion."
Senses of Cinema
Not Coming
vimeo: Black Panthers (Agnès Varda, 1968 doc.)