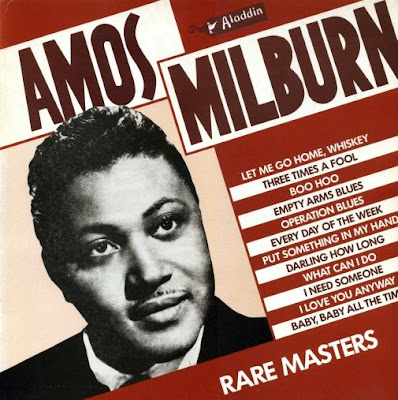 Wikipedia - "Joseph Amos Milburn, Jr. (April 1, 1927 – January 3, 1980) was an African-American rhythm and blues singer and pianist, popular during the 1940s and 1950s. He was born and died in Houston, Texas. One commentator noted, 'Milburn excelled at good-natured, upbeat romps about booze and partying, imbued with a vibrant sense of humour and double entendre, as well as vivid, down-home imagery in his lyrics.' ... The Texan boogie-woogie pianist and singer was an important performer of blues music during the years immediately after World War II. Milburn was one of the first performers to switch from sophisticated jazz arrangements to a louder 'jump' blues. He began to emphasize rhythm and technical qualities of voice and instrumentation second. "
Wikipedia
allmusic
The Official Amos Milburn
YouTube: Down The Road A Piece, Chicken Shack Boogie, Rocky Mountain, One Scotch, One, Bourbon, One Beer, Bad Bad Whiskey, Milk and Water, Vicious, Vicious Vodka, I Done Done It, Rock Rock Rock, Rooming house boogie, My Baby's Boogying
Posted by Bill at 12:00 PM