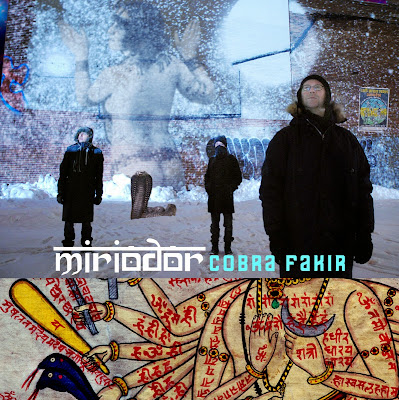 "The music fashioned by Canadian group Miriodor has always been outside the box. Miriodor was formed in the early 1980s in Quebec. Co-founder Pascal Globensky (who plays several keyboards) and drummer Rémi Leclerc (who also adds percussion, keys and turntable effects) are currently the only remaining members from that earlier era. Right from the start, Miriodor was known for making music which did not easily fit into any specific category, but did show a philosophy equivalent to European ensembles who were aligned with the Rock in Opposition (RIO) style pioneered by acts such as Henry Cow, Univers Zéro and others, who merge progressive rock, avant-garde music, and intricate chamber music."
Audiophile Audition
tribe (Video)
Astounded By Sound
vimeo: Cobra Fakir
YouTube: Cobra Fakir, Titan, La Roche (Washington D.C.)
Posted by Bill at 3:35 PM