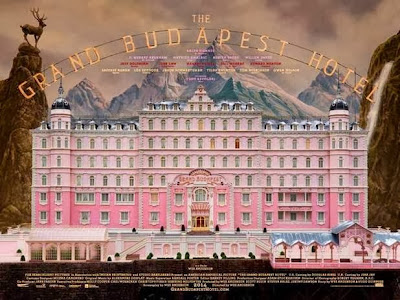 Wikipedia - "The Grand Budapest Hotel is a 2014 comedy film written and directed by Wes Anderson and inspired by the writings of Stefan Zweig. It stars Ralph Fiennes as a concierge who teams up with one of his employees to prove his innocence after he is framed for murder. ... In the present, a teenage girl approaches a monument to a writer in a cemetery. In her arms is a memoir penned by a character known only as 'The Author' (Tom Wilkinson). She starts reading a chapter from the book. The Author begins narrating the tale from his desk in 1985 about a trip he made to the Grand Budapest Hotel in 1968. Located in the fictional Republic of Zubrowka, a European alpine state ravaged by war and poverty, the young Author (Jude Law) discovers that the remote, mountainside hotel has fallen on hard times."
Wikipedia
New Yorker
Slate (Video)
YouTube: Official International Trailer HD, Meet the Cast of Characters, Featurette: "The Story", "Good Morning, Pinky", "They Only Had the Half-Ounce", "Interview with Zero"