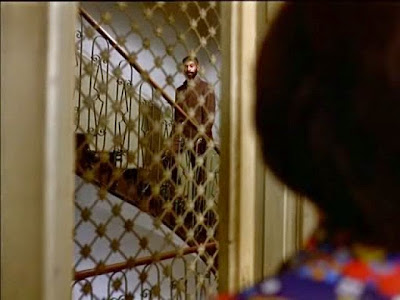 Wikipedia - "Ali: Fear Eats the Soul is a 1974 West German film written and directed by Rainer Werner Fassbinder and starring Brigitte Mira and El Hedi ben Salem. The film won two awards at the 1974 Cannes Film Festival[1] and is considered to be one of Fassbinder's most powerful works. Brigitte Mira received the German Film Award for her performance. ... Ali (Salem), is a Moroccan Gastarbeiter (guest worker) in his late thirties, and Emmi (Mira), is a 60-year-old widowed cleaning woman. They meet when Emmi ducks inside a bar, driven by the rain and drawn by the exotic Arabic music (Al Asfouryeh by Sabah) she says she has heard so often on her walk home from work. A woman in the bar (Katharina Herberg) who is part of Ali's Arabic-speaking cohort tauntingly suggests Ali ask Emmi ('the old woman') to dance, and Emmi accepts. A strange and unlikely friendship develops, then a romance and soon they are living together in Emmi's flat."
Wikipedia
Criterion (Video)
Roger Ebert
Reverse Shot
Bright Lights Film Journal
YouTube: Ali: Fear Eats the Soul