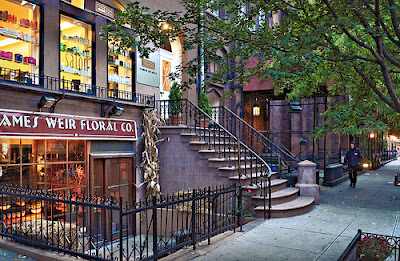 Wikipedia - "Brooklyn Heights is an affluent residential neighborhood within the New York City borough of Brooklyn. Originally referred to as 'Brooklyn Village', it has been a prominent area of Brooklyn since 1834. As of 2000, Brooklyn Heights sustained a population of 22,594 people. The neighborhood is part of Brooklyn Community Board 2. ... It is a popular tourist destination, a fine termination point, with its spectacular views, after a breath-taking walk over the Brooklyn Bridge. By the mid-1950s a new generation of property owners began moving into the Heights. They pioneered the so-called Brownstone Revival by buying and renovating pre-civil war period houses. The new population and their consolidated opposition to a Robert Moses slum clearance plan for luxury rental housing led to the development of a major middle income cooperative known as Cadman Plaza."
Wikipedia
Montague Street: The Shopping Street of Historic Brooklyn Heights
YouTube: New York City - Video tour of Brooklyn Heights, Brooklyn (Part 1), (Part 2)
Posted by Bill at 1:25 PM