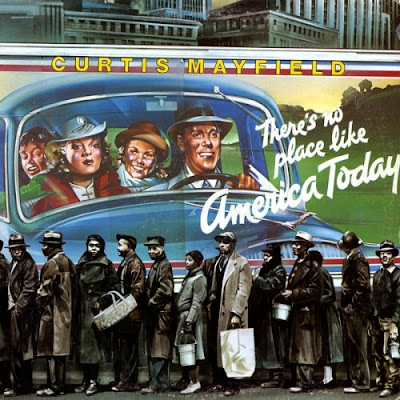 "The title is intended in an ironic way, as illustrated not only by the cover -- a grim parody of late-'40s/early-'50s advertising imagery depicting white versus black social reality -- but the grim yet utterly catchy and haunting opening number, 'Billy Jack.' A song about gun violence that was years ahead of its time, it's scored to an incisive horn arrangement by Richard Tufo. 'When Seasons Change' is a beautifully wrought account of the miseries of urban life that contains elements of both gospel and contemporary soul. ... The album doesn't really have as clearly delineated a body of songs as Mayfield's earlier topical releases, but it's in the same league with his other work of the period and represents him near his prime as a composer."
allmusic
W - There's No Place Like America Today
NPR: You've Never Heard Curtis Mayfield's 'There's No Place Like America Today'?! (Video)
YouTube: There's No Place Like America Today (1975)
01. Billy Jack 06:04 02. When Seasons Change 05:23 03. So In Love 05:12 04. Jesus 06:10 05. Blue Monday People 04:47 06. Hard Times 03:43 07. Love To The People 04:03