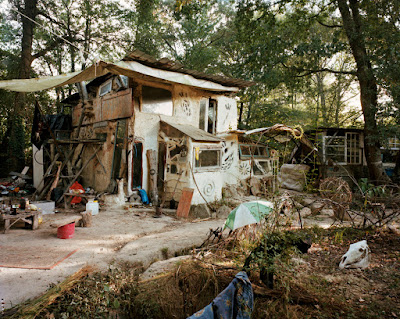 La Boite Noir (the Black Box), one of the cabins destroyed.
Wikipedia - "The expression Zone to Defend or ZAD (French: zone à défendre) is a French neologism used to refer to a militant occupation that is intended to physically blockade a development project. The ZADs are organized particularly in areas with an ecological or agricultural dimension, notably in the permanent blockade village against an airport in Notre-Dame-des-Landes. However the name has also been used by occupations in urban areas, e.g.: in Rouen, in Décines-Charpieu. One of the movement's first slogans was 'ZADs everywhere' and though there are no official figures, in early 2016 there were estimated to have been between 10 and 15 ZADs across France. The acronym 'ZAD' is a détournement of 'deferred development area' (from French: 'zone d'aménagement différé'). In 2015, the French term 'zadiste' (English: Zadist) entered the 2016 edition of Le Petit Robert dictionary as 'a militant occupying a ZAD to oppose a proposed development that would damage the environment.' Appearing in France in the early 2010s, the term was first popularized during the opposition to the airport construction project in Notre-Dame-des-Landes, north of Nantes. The ZAD movement has its origins in challenging large infrastructure projects in defense of the environment, local people's right to decide the future of their territories (at the price, if necessary, of conflict with state power) and the rejection of the capitalist economy. ... In April 2018, there was another attempt to evict the ZADists of the Notre-Dame-des-Landes commune by police with at least 2500 riot police on the scene. The evacuation began April 9th and officialy finished the 13th April with the destruction of 29 squats on 97, but the police is still deployed to secure the roads on the April 23rd. ..."
Wikipedia
ROAR: The revenge against the commons of the ZAD
Verso Archive of Zad
“Everything’s coming together while everything’s falling apart: The ZAD” - Nov 7, 2017 (Video) 36:34 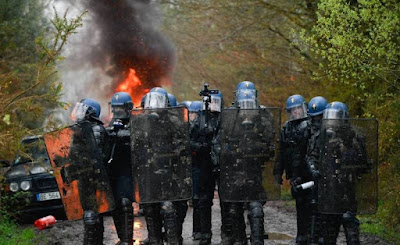 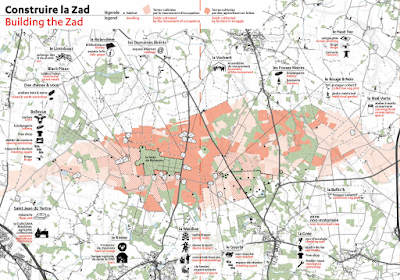