The Greatest Refreshment By Janet Flanner 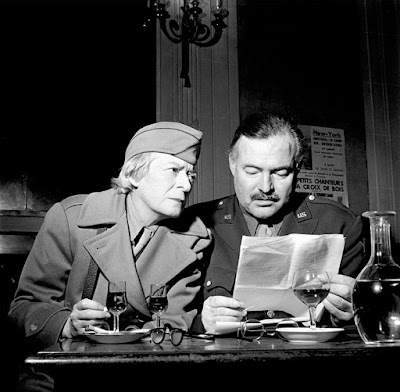 Janet Flanner and Ernest Hemingway at Deux Magots Café in Paris, 1945.
"It is now more than a half century since Paris for the first time began to be included in the memories of a small contingent of youngish American expatriates, richer than most in creative ambition and rather modest in purse. For the most part, we had recently shipped, third class, to France across the Atlantic. We had settled in the small hotels on the Left Bank near the Place Saint-Germain-des-Prés, itself perfectly equipped with a large corner café called Les Deux Magots and an impressive twelfth-century Romanesque church with a small garden of old trees, from whose branches the metropolitan blackbirds sang at dawn, audible to me in my bed close by in the Rue Bonaparte. Though unacquainted with one another, as compatriots we soon discovered our chance similarity. We were a literary lot. Each of us aspired to become a famous writer as soon as possible. After the New York publication of Ernest Hemingway’s 'The Sun Also Rises,' he was the first one to touch fame. As I look back on the stir created by his individual style of writing, what stands out in my memory is the fact that his heroes, like Ernest himself, were of outsize masculinity even in small matters. In a letter he wrote to me, he said that he liked to hunt because he liked to kill. ..."
New Yorker
Posted by Bill at 12:56 PM