The Sistine Chapel of Comic-Strip Art

What remains of the cartoon wall at the Overlook, a Midtown sports bar.
"In a dark booth at the Overlook, which resides in a little brick building that has defied demolition below the skyscrapers of East Midtown, two men were having a beer. The bar was rowdy with people eating wings and watching basketball on televisions, but the men were busy studying the cracked, aging wall beside them. Twenty feet wide and spanning the room’s length, it was covered with dozens of fading drawings of classic American cartoon and comic strip characters. ... This crumbling, beer-splotched wall in the back of a sports bar on East 44th Street is one of New York’s more neglected cultural treasures. Created in the 1970s, it is a veritable Sistine Chapel of American comic-strip art: the 30-some drawings across its face were left by a who’s who of cartooning legends, including a Spider-Man by Gil Kane, a Beetle Bailey by Mort Walker, a Dondi by Irwin Hasen, a Steve Canyon by Milton Caniff, a Hagar the Horrible by Dik Browne, and a Dagwood Bumstead by Paul Fung Jr. There’s also a self-portrait by Al Jaffee, a doodle by Bil Keane, and a Mad magazine-style gag by Sergio Aragonés. Old regulars are familiar with the wall’s past, and comic book scholars make occasional pilgrimages to the bar, but the Overlook’s cartoon mural remains largely unknown and untended. ..."
NY Times 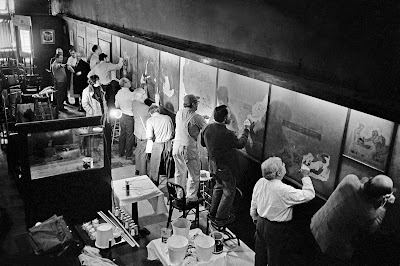 A group of artists works to restore the original James Thurber murals at Costello's, April 1972.
Posted by Bill at 1:16 PM