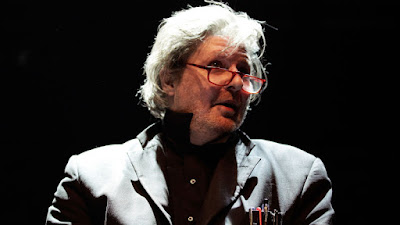 "'It's like a lot of people fucking jerking off, is what it sounds like to me.' Suffice to say, Glenn Branca is not a fan of improvised music. Not, at least, of improvisation 'the way it's done now,' what he calls 'this Zorn-ish kind of free improv.' We're sat in the darkened breakfast bar of a chain hotel just beyond the Parisian périphérique. Branca, sixty-four years old with greying hair swept back and a slight cloudiness to his eyes suggestive of incipient cataracts, wears a heavy black jacket with half a dozen different pens in the breast pocket. A twilight blue scarf hangs down across a green jumper in rough-hewn wool. The former guitarist in no wave bands Theoretical Girls and The Static, turned composer of epic electric guitar orchestras that once featured the young Thurston Moore and Lee Ranaldo, wears his black shirt with the collar popped up. 'When free improvisation first broke out – ' he doesn't so much speak as growl, a throaty east coast drawl with a nicotine rasp like a traction engine ' – mainly starting with Coltrane. I mean, really free improvisation – ' his fingers, usually steepled on the table in front of him, briefly extricate themselves to gesture a little theatrically, shades of the actor he once was, ' – it was interesting,' he concedes, somewhat philosophically. ..."
The Quietus (Video)
NY Times - Remembering Glenn Branca: Hear 10 of His Essential Works (Video)
Guardian - Glenn Branca: punk composer who turned minimalism maximal (Video)
Discogs
W - Glenn Branca 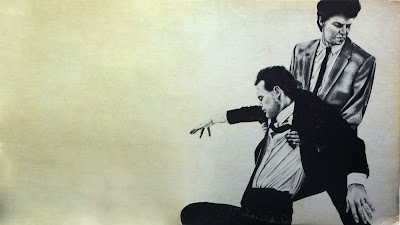