How Pharoah Sanders Brought Jazz to Its Spiritual Peak with His Impulse! Albums 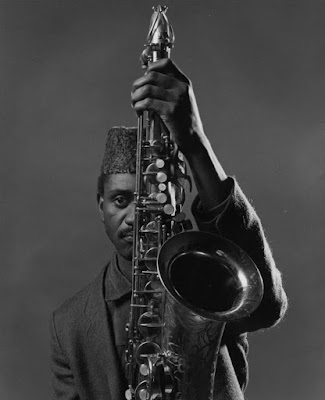 "With Ayler's statement about jazz's so-called 'New Thing,' the metaphor was cast. Of course John Coltrane – the giant of the tenor saxophone who brought Eastern thought to bear on his own music – was deemed the father. It was ‘Trane who gave his blessing to the next generation of players: Archie Shepp, Marion Brown, John Tchicai, Dewey Johnson, Pharoah Sanders, Albert Ayler and more before Coltrane left his earthly body in 1967. And it was Ayler who best embodied the fiery cast of free jazz, burning bright only to burn out, dragged out of the East River at the age of 34. Yet as he nears his 75th year, Sanders’ body of work does not enjoy nearly the same reverence, awe and praise as the others in the holy trinity of spiritual jazz. Coltrane continues to be the subject of colossal box sets and deluxe reissues, Ayler has had every scrap of recorded music culled and collected, while Sanders’ oeuvre stands in disarray. His eleven Impulse albums – from 1967’s Tauhid to 1974’s Love in Us All – comprise arguably the greatest run on the label. Yet outside of 1969’s Karma, none of Pharoah’s Impulse albums are currently in print in the U.S. Half of them are unavailable on CD or vinyl, the other half are bundled as two-for-one budget imports, with no remastering or bonus tracks. Most of the ink given to Sanders appears at the tail end of Coltrane bios, noting that Sanders was the lone horn player to share the bandstand with Coltrane at the end of his life. In Ornette Coleman’s estimation, Sanders is 'probably the best tenor player in the world.' And while Sanders has released many albums on many labels, nothing matches his Impulse years. The music he made with large ensembles in the late ‘60s and early ‘70s drew from the jazz tradition, but elevated the form so as to embrace gospel, soul, African folk, R&B and what would soon be deemed world music, weaving it all into a tapestry that spoke of African-American identity, spiritual realization and world peace. ..."
Red Bull Music Academy Daily (Video)
YouTube: Pharoah Sanders (Live Video - 1968) Festival France. Lonnie Liston Smith - piano: Sirone - bass