Centrists Are the Most Hostile to Democracy, Not Extremists 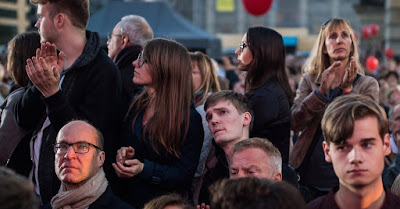 A rally last September in Berlin for Martin Schulz, the Social Democrats’ candidate for German chancellor.
"The warning signs are flashing red: Democracy is under threat. Across Europe and North America, candidates are more authoritarian, party systems are more volatile, and citizens are more hostile to the norms and institutions of liberal democracy. These trends have prompted a major debate between those who view political discontent as economic, cultural or generational in origin. But all of these explanations share one basic assumption: The threat is coming from the political extremes. On the right, ethno-nationalists and libertarians are accused of supporting fascist politics; on the left, campus radicals and the so-called antifa movement are accused of betraying liberal principles. Across the board, the assumption is that radical views go hand in hand with support for authoritarianism, while moderation suggests a more committed approach to the democratic process. Is it true? Maybe not. My research suggests that across Europe and North America, centrists are the least supportive of democracy, the least committed to its institutions and the most supportive of authoritarianism. ..."
NY Times
Posted by Bill at 1:50 PM