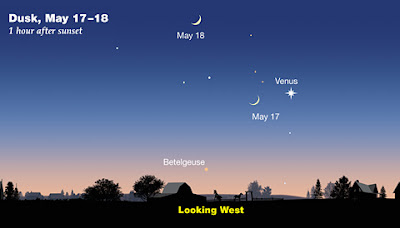 The planet Venus is unmistakably bright in the west after sunset. On May 17–18, it's joined by a thin crescent Moon.
"This month's astronomy podcast tells you how to use Venus and the Big Dipper to find many bright stars and constellations. Meanwhile, Jupiter lurks low in the east after darkness falls. During most of this month, the Sun doesn’t set until nearly 8 o’clock, so it’s not really dark until well after dinnertime. And you might even need lightweight long-sleeved clothing or some bug spray to ward off the season’s first wave of insects. But there's always plenty to see in the night sky after the Sun goes down, and May is no exception. Look for hard-to-miss Venus low in the west as darkness falls.You can use Venus to identify several bright stars in its part of the sky. This month's astronomy podcast tells you how to do that — and you'll learn their names too! The Big Dipper is another easy-to-find benchmark in the evening skies of May. ..."
Sky & Telescope (Audio)
Posted by Bill at 1:34 PM