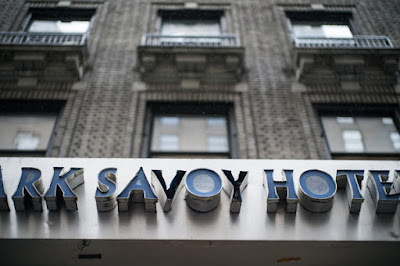 The plan to turn the Park Savoy Hotel in Midtown Manhattan into a men's homeless shelter has drawn a range of reactions.
"In the August heat two years ago, residents of Maspeth, Queens, learned of a homeless shelter planned for their neighborhood and erupted in fury, unleashing a campaign of vulgar, racially tinged protests. Maspeth residents picketed a hotel being used as a shelter, spewing hate as homeless children sat inside. They voted the local councilwoman, Elizabeth Crowley, out of office, replacing her with the man who had led their crusade. They shouted down Steven Banks, commissioner of the city’s Human Resources Administration, as he appealed to their sense of compassion during a community meeting, then took their protest to the doorstep of his Brooklyn home. 'Leave Maspeth Alone!' some of their signs read. 'Maspeth Lives Matter!' The city ultimately surrendered. Now, a similar battle is unfolding in the heart of Midtown Manhattan, as residents fight a men’s shelter the city plans to open in the now-shuttered Park Savoy Hotel. The site, on West 58th Street, is one of 90 that Mayor Bill de Blasio has said he will open as part of a yearslong plan. In Maspeth, a mostly white, blue-collar area of Queens, the news of a homeless shelter was met with something barely short of a riot. ..."
NY Times
NY Post: A homeless shelter is coming to Billionaires’ Row
Posted by Bill at 1:50 PM