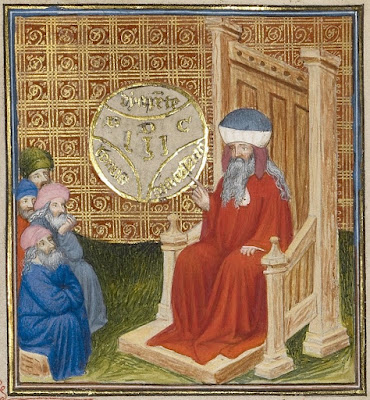 Boethius Discusses Music with a Group of Men, miniature from a c. 1405 edition of Boethius’ Fundamentals of Music
"The last time I spoke with Sun Ra, I asked him for his take on the enduring legacy of the Great American Songbook. It was 1993. Ra had returned to Birmingham, Alabama, where he’d been born nearly eighty years before. He would die there, from complications associated with pneumonia, a few weeks later. The pianist, composer, and bandleader’s first published composition, 'Alone with Just a Memory of You,' written in 1936 together with Henry McCellons, conveyed a tender, awkward Tin Pan Alley tone that betrayed his love of sentimental songcraft. This passion is driven home repeatedly in a survey of Ra’s magnificently gigantic discography. He employed anachronistic singers like Clyde Williams and Hattie Randolph. ... Never mind that Ra is known as one of the most adventurous and innovative figures in the history of the twentieth century. That he brought synthesizers to jazz. That his costumes and light shows paved the way for psychedelic rock. That he wrote apocalyptic and deeply philosophical poetry.  ..."
Laphams Quarterly
Posted by Bill at 1:48 PM