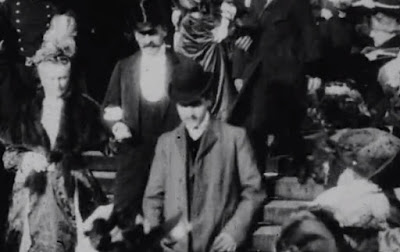 The First Known Footage of Marcel Proust Discovered: Watch It Online
"Marcel Proust’s legions of fans have obsessed about the meaning of his sometimes impenetrable prose, fetishized his tatty fur coat and bed, parsed his manuscripts and, fairly or not, lauded 'Remembrance of Things Past' as the greatest literary work of the 20th century. Now, Proustians the world over are eagerly awaiting two events that may shed new light on the self-consciously eccentric writer and master excavator of memories who arguably out-Joyced Joyce in his epic modernism and whose prose Nabokov once called 'translucid.' Some 6,000 letters written by Proust, many of which had been collected and published by the scholar Philip Kolb of the University of Illinois at Urbana-Champaign, will be put online and made available free to scholars and general readers alike. ..."
NY Times