J.F.K. Files, Though Incomplete, Are a Treasure Trove for Answer Seekers 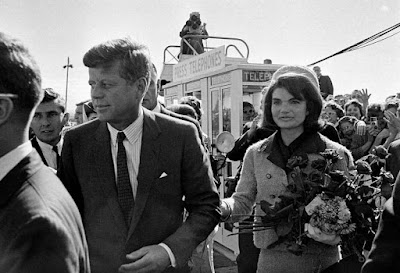 John F. Kennedy arrived in Dallas on the day he was assassinated in 1963.
"President Trump ordered the long-awaited release on Thursday of more than 2,800 documents related to the assassination of President John F. Kennedy, but bowed to pressure from the C.I.A. and F.B.I. by withholding thousands of additional papers pending six more months of review. While incomplete, the documents were a treasure trove for investigators, historians and conspiracy theorists who have spent half a century searching for clues to what really happened in Dallas on that fateful day in 1963. They included tantalizing talk of mobsters and Cubans and spies, Kremlin suspicions that Lyndon B. Johnson was behind the killing, and fear among the authorities that the public would not accept the official version of events. Paging through the documents online on Thursday night was a little like exploring a box of random papers found in an attic. There were fuzzy images of C.I.A. surveillance photos from the early 1960s; a log from December 1963 of visitors, including a C.I.A. officer, to Johnson’s ranch in Texas; and reports that Lee Harvey Oswald obtained ammunition from a right-wing militia group. Some of the documents convey some of the drama and chaos of the days immediately after the murder of the president. Among them is a memo apparently dictated by J. Edgar Hoover, the F.B.I. director, on Nov. 24, 1963, shortly after Jack Ruby shot and killed Oswald as he was being moved from Police Headquarters to a local jail. ..."
NY Times (Video)
NY Times - A J.F.K. Assassination Glossary: Key Figures and Theories (Video)
NY Times - The J.F.K. Files: Decades of Doubts and Conspiracy Theories (Video)
W - Assassination of John F. Kennedy
W - John F. Kennedy assassination conspiracy theories
W - Umbrella man (JFK assassination)
W - Badge Man, W - Three tramps, W - Babushka Lady