How Does It Feel? An Alternative American History, Told With Folk Music 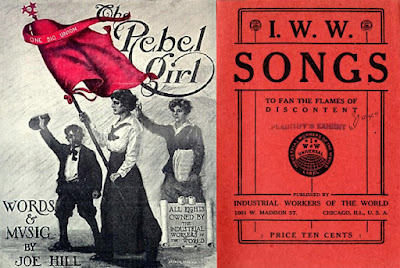 "You could say the silence started in Calumet in 1913. Word spread that the doors opened inward, that no one was to blame. What followed was a great quiet, a hundred years of agreed-upon untruth. Or you could say it began just afterward, during the patriotic rush of the First World War and the Palmer Raids that followed. The Wobblies were crushed, the call for a workers’ alternative stilled. Or you could say it began after the Second World War. If you see the two global conflicts as a single long realignment of power, then after America emerged as a superpower, its century-long Red Scare kicked back in with a vengeance. That’s how Elizabeth Gurley Flynn saw it. She traced the 'hysterical and fear laden' atmosphere of the late 1940s back to when she was a union maid visiting Joe Hill in prison. 'Now,' she said, 'it is part of the American tradition.' ..."
Longreads (Video)
amazon: Grown-Up Anger: The Connected Mysteries of Bob Dylan, Woody Guthrie, and the Calumet Massacre of 1913 - Daniel Wolff