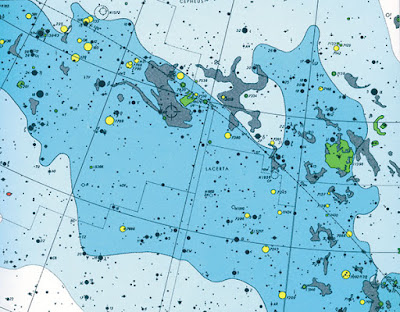 Skalnate Pleso Atlas of the Heavens
"There are different experiences of awe or great wonder in astronomy. The most staggering and momentous, I believe, comes during a total eclipse of the Sun. But the most peacefully (yet still stirringly) wondrous is the sight of a clear, dark sky filled with stars. Perhaps the best sky of this sort was one I observed 40 years ago this September. Across most of the contiguous United States, the least cloudy time of year runs from about late August through mid-October. Strong cold fronts move through frequently but briefly, temporarily pushing away clouds and haze. ... But some of the clearest and therefore most star-crowded nights I’ve experienced occurred in September or early October. Take a look at our October all-sky map on page 42 (October 2017 issue). ..."
Sky & Telescope
Posted by Bill at 3:20 PM