At the Whitney, a Vision of Africa—Without the Colonialist Meddling 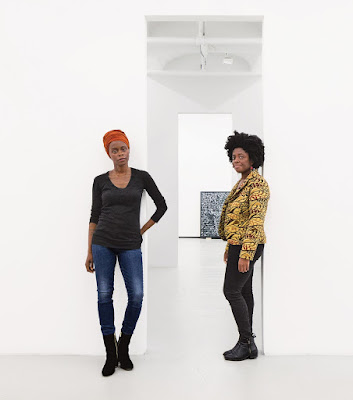 Toyin Ojih Odutola (left), originally from Nigeria, and Yaa Gyasi, born in Ghana, photographed in February at Jack Shainman Gallery in New York.
"In the summer of 2016, the poet Claudia Rankine published an essay in Aperture magazine about drawings made by the artist Toyin Ojih Odutola. Ojih Odutola was born in Nigeria, immigrated to the States with her family at age 5, and spent her formative years in Huntsville, Alabama. 'Individuals populate her portraits,' wrote Rankine, 'but remain in conversation with something less knowable than their presumed identity. To settle down her images, to name them, is to render them monolithic.' Rankine was writing about Ojih Odutola’s pen ink drawings, for some time the signature of her practice. These were, in her own telling, 'conceptual portraits' of anonymous subjects (though if you looked close, the faces often resembled that of the artist) depicted unclothed and decontextualized in blank space. What distinguished them was both medium—pen and paper is not often associated with fine art—and style. Ojih Odutola’s subject, principally, was black skin, which she drew shimmering and undulating and alive, sometimes in monotones, sometimes with prismatic bursts of color. ..."
Vogue
NY Times: A Portrait of the Artist as a Young African Immigrant
Whitney - Toyin Ojih Odutola: To Wander Determined
NOWNESS (Video)