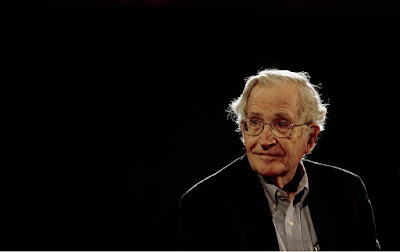 "... There is a diversionary process under way, perhaps just a natural result of the propensities of the figure at center stage and those doing the work behind the curtains. At one level, Trump’s antics ensure that attention is focused on him, and it makes little difference how. Who even remembers the charge that millions of illegal immigrants voted for Clinton, depriving the pathetic little man of his Grand Victory? Or the accusation that Obama had wiretapped Trump Tower? The claims themselves don’t really matter. It’s enough that attention is diverted from what is happening in the background. ..."
The Nation

2011 January: Peak Oil and a Changing Climate, 2015 May: The Limits of Discourse As Demonstrated by Sam Harris and Noam Chomsky, 2015 October: Electing the President of an Empire, 2015 December: Noam Chomsky on Paris attacks, 2016 December: Chomsky: Humanity Faces Real and Imminent Threats to Our Survival, 2017 April: Requiem for the American Dream: The 10 Principles of Concentration of Wealth & Power (2016), 2017 July: Noam Chomsky: Neoliberalism Is Destroying Our Democracy
Posted by Bill at 2:32 PM