The writing on the wall of an East Side tenement 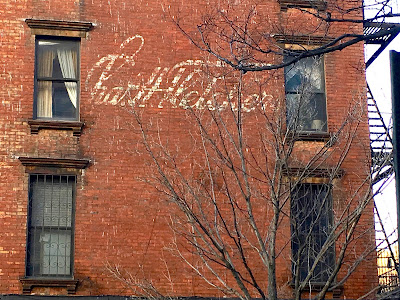 "Sometimes in New York you come across a building that’s trying to tell you something. Take this red-brick tenement on the corner of Second Avenue and 109th Street. At some point in the past, ads were painted on the facade—designed to catch the eyes of Second Avenue El riders and pedestrians in a neighborhood that was once a Little Italy, then became Spanish Harlem by the middle of the century. Now, perhaps nine decades later, enough faded and weathered paint remains to give us a clue as to what the ads were about. The ad on the right side of the facade might look familiar to faded-ad fans; that familiar script used to be painted all over the city. Fletcher’s Castoria was a laxative produced by Charles Fletcher all the way back in 1871. The company promoted the product until the 1920s with ads on the sides of buildings, a few of which can still be seen today. ..."
Ephemeral New York
Posted by Bill at 2:04 PM