Wikipedia - "The Aubrey–Maturin series is a sequence of nautical historical novels—20 completed and one unfinished—by Patrick O'Brian, set during the Napoleonic Wars and centering on the friendship between Captain Jack Aubrey of the Royal Navy and his ship's surgeon Stephen Maturin, a physician, natural philosopher, and intelligence agent. The first novel, Master and Commander, was published in 1969 and the last finished novel in 1999. The 21st novel of the series, left unfinished at O'Brian's death in 2000, appeared in print in late 2004. The series received considerable international acclaim and most of the novels reached The New York Times Best Seller list. ... The series focuses on two main characters, naval officer Jack Aubrey and physician, naturalist, and spy Stephen Maturin, and the ongoing plot is structured around Aubrey's ascent from Lieutenant to Rear Admiral in the Royal Navy during the French Revolutionary and Napoleonic Wars. ..."
W - Aubrey–Maturin series
The Patrick O'Brian Compendium
The Patrick O'Brian Mapping Project
Ships of Jack Aubrey
The Patrick O'Brian Novels
The Paris Review: Patrick O'Brian, The Art of Fiction No. 142
W - Patrick O'Brian 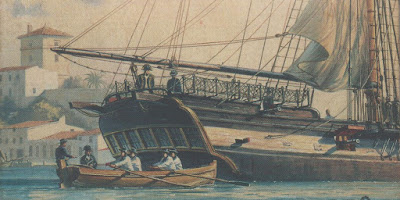