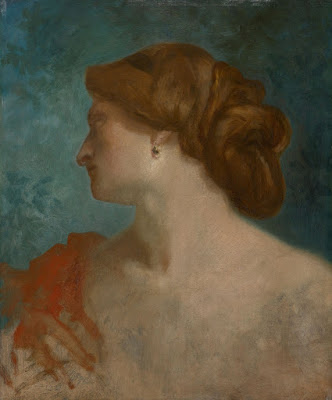 Portrait of a Woman in Profile, circa 1857-60
"Michael Werner Gallery, New York is pleased to present an exhibition of works by French painter Pierre Puvis de Chavannes (1824-1898), opening 30 November. Comprising loans from private and public collections, this exhibition presents a selection of works on paper and paintings by a seminal artist of the late nineteenth century. ... Pierre Puvis de Chavannes was born in Lyon, France in 1824, the youngest of four children in a family descended from Burgundy nobility. Puvis anticipated a career in engineering, following his father, until his studies were interrupted by the death of his mother, an illness and lengthy convalescence, and an eventual sojourn in Italy meant to help him regain his health. The latter experience, in particular his exposure to Giotto and Piero della Francesca, made a deep impression on Puvis, who determined to pursue a life in art upon his return to Paris in 1848. ..."
Michael Werner Gallery, New York
NY Times: A French Painter, Fallen From Fame, Gains Historical Weight
YouTube: Restoration of Pierre Puvis de Chavannes’ Philosophy Mural Panel 22:28