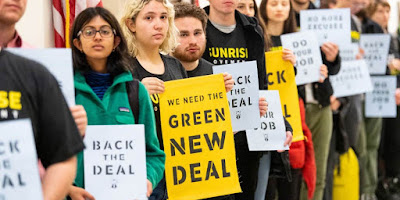 "... Their last big plan — the American Clean Energy and Security Act — passed the House in 2009 but went on to die an unceremonious death before reaching the Senate floor. Since then, there’s been nothing to replace it. Plenty of Democratic politicians support policies that would reduce climate pollution — renewable energy tax credits, fuel economy standards, and the like — but those policies do not add up to a comprehensive solution, certainly nothing like what the Intergovernmental Panel on Climate Change (IPCC) suggests is necessary. Young activists, who will be forced to live with the ravages of climate change, find this upsetting. So they have proposed a plan of their own. It’s called the Green New Deal (GND) — a term purposefully reminiscent of Franklin Delano Roosevelt’s original New Deal in the 1930s — and it has become the talk of the town. ..."
Vox: The Green New Deal, explained (Video)
NY Times: “The Argument” (Audio)
W - Green New Deal
Jacobin: A Green New Deal for Housing
Posted by Bill at 12:01 PM