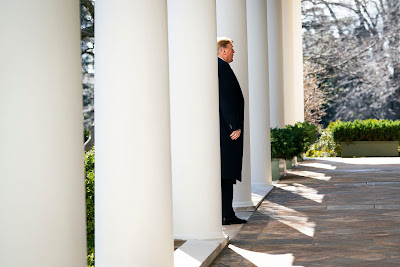 President Trump on Friday after he declared a national emergency.

"'I didn’t need to do this,' President Trump insisted at a Rose Garden appearance on Friday, as he declared a national emergency aimed at shaking loose a few billion dollars in financing for his beloved border wall. The president’s assertion was both ludicrous and self-defeating. If a declaration was unnecessary and the wall on track (the wall is 'very very on its way,' the president said earlier in the week), how could he claim to be addressing an emergency? As Mr. Trump explained it, 'But I’d rather do it much faster.' A presidential desire for speed does not constitute a crisis — no matter how eager a president is to camouflage his failures. In reality, the wall is not a done deal, and Mr. Trump has spent the past few months — the past two years, really — failing to convince either Congress or Mexico to pay for it. ..."
NY Times
Posted by Bill at 1:47 PM