Sandpaper Is a Form of Change - Hainbach 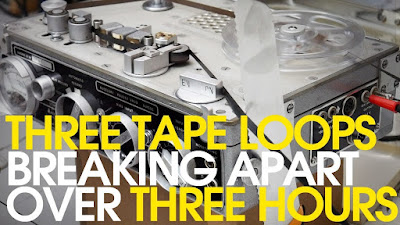 "Repetition may be, as Brian Eno famously put it, a form of change, but so too is slow deterioration as a result of sharp edges and rough surfaces. The latter is the process employed by the musician Hainbach in 'Three Tape Loops Destructing Over Three Hours.' (It’s actually close to three and a half hours.) The source audio is piano that Hainbach recorded himself. In the extended video, the resulting tape recordings are seen and heard to slowly come apart as they are exposed to various knife blades and sandpaper. Soft tones give way to serrated noise. The ear hears continuity amid the destruction, as the abbrasive texture itself becomes a sonic element in the mix. It’s worth noting that the project began as a challenge from Simon the Magpie, whose curse-laden, manic proposal is about as distinct from Hainbach’s sedate, reflective pace as could be imagined. This is the latest video I’ve added to my YouTube playlist of recommended live performances of ambient music. Video originally posted at Hainbach’s YouTube channel."
disquiet (Video)
Hainbach (Video)
YouTube: Three Tape Loops Destructing Over Three Hours, Performing Electronic Music | My Live Setup 16:27
Posted by Bill at 1:56 PM