"'Bloomsday,' the James Joyce scholar Robert Nicholson once quipped, 'has as much to do with Joyce as Christmas has to do with Jesus.' The celebrations of Ulysses every June 16—the date on which the novel is set—attract extreme ends of the spectrum of literary enthusiasm. Academics and professionals mingle with obsessives and cranks, plus those simply along for the ride. The event can be stately and meticulous or raucous and chaotic—or, somehow, all of the above. A telling instance came a few years ago, when the Irish Arts Center arranged a Bloomsday picnic in New York’s Bryant Park, under the rueful shadow of the Gertrude Stein statue. (Stein disliked Joyce.) Aspiring Broadway types were enlisted to circulate in period costume before bursting into popular songs from 1900-era Ireland. I spoke to one of the performers, a young Irish actor who had recently moved to New York. Had she read Ulysses? ..."
The Paris Review
Exploring The Dublin of James Joyce: A Guide Map 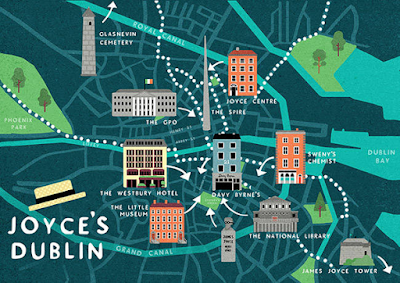