The Myth of Whiteness in Classical Sculpture 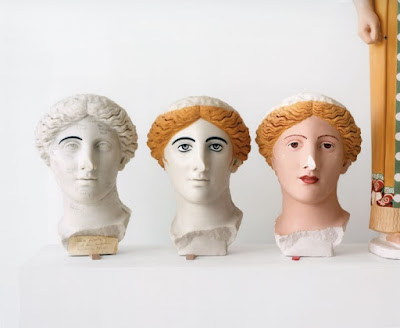 Researchers demonstrate the process of applying color to the Treu Head, from a Roman sculpture of a goddess, made in the second century A.D. Ancient sculptures were often painted with vibrant hair colors and skin tones.
"Mark Abbe was ambushed by color in 2000, while working on an archeological dig in the ancient Greek city of Aphrodisias, in present-day Turkey. At the time, he was a graduate student at New York University’s Institute of Fine Arts, and, like most people, he thought of Greek and Roman statues as objects of pure white marble. The gods, heroes, and nymphs displayed in museums look that way, as do neoclassical monuments and statuary, from the Jefferson Memorial to the Caesar perched outside his palace in Las Vegas. Aphrodisias was home to a thriving cadre of high-end artists until the seventh century A.D., when an earthquake caused it to fall into ruin. In 1961, archeologists began systematically excavating the city, storing thousands of sculptural fragments in depots. ..."
New Yorker (Audio)
Posted by Bill at 1:42 PM