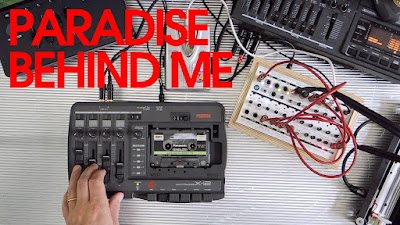 "Just yesterday, the musician Hainbach released a short video, barely five minutes long, of a noise-informed, texture-rich ambient performance. The instrumentation on this is simple: cassette playback, which Hainbach controls four channels on, and an effects unit. The piece develops in two primary ways: as the relative levels of those channels are adjusted, and as the various effects are put into effect. A loop of murky, sodden, melting melody, seemingly on piano, is warped beneath the distressed qualities of the tape on which it was first recorded. ... This is the latest video I’ve added to my YouTube playlist of recommended live performances of ambient music. Track originally posted at Hainbach’s YouTube channel. More from Hainbach, aka Stefan Paul Goetsch, who is based in Berlin, at hainbachmusik.com and hainbach.bandcamp.com.
disquiet (Video)
Posted by Bill at 1:46 PM