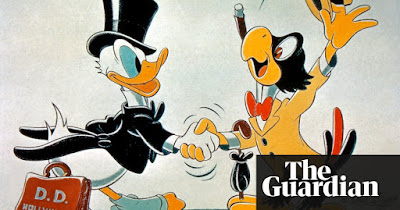 Donald Duck in The Three Caballeros, 1944
"I should not have been entirely surprised when I saw How to Read Donald Duck, a book I had written with the Belgian sociologist Armand Mattelart, being burned on TV by Chilean soldiers. It was mid-September 1973 and a military coup had just toppled Salvador Allende, the country’s president, terminating his remarkable experiment of building socialism through peaceful means. I was in a safe house when I witnessed my book – along with hundreds of other subversive volumes – being consigned to the inquisitorial pyre. One of the reasons I had gone into hiding, besides my fervent participation in the revolutionary government that had just been overthrown, was the hatred the Donald Duck book had elicited among the new authorities of Chile and their rightwing civilian accomplices. ..."
Guardian
W - How to Read Donald Duck
[PDF] How to Read Donald Duck
vimeo: Rodrigo Dorfman - How to Read Donald Duck Redux
W - 1973 Chilean coup d'état, W - Salvador Allende 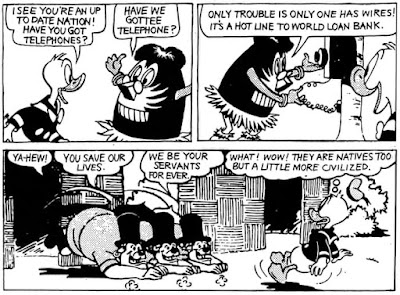 ‘As amusing as the Duck we were disparaging’ … a strip from How to Read Donald Duck by Ariel Dorfman and Armand Mattelart.
Posted by Bill at 2:07 PM