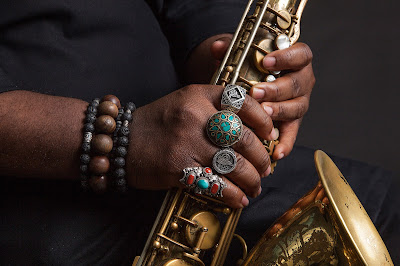 The only tenor saxophone that Kamasi Washington has ever played was once his father’s.
"On a late October afternoon in South Central Los Angeles, Kamasi Washington was facing what is for him an increasingly familiar problem: making a lot of big ideas fit into a single space, even one as large as the nearby Club Nokia, a rock-star-size venue where he would be performing in December. His recent triple album, ‘The Epic,’ is a nearly three-hour suite for a 10-piece jazz band, backed by a 32-piece orchestra and a 20-person choir. Washington’s show promised to be a typical swirl of activity, a sprawling procession of dancers, musicians, DJs and singers unified by the magisterial sound of Washington himself, a 34-year-old tenor saxophonist who has emerged as the most-talked-about jazz musician since Wynton Marsalis arrived on the New York scene three decades ago. ..."
NY Times (Jan. 21, 2016)