Listening to Paintings in the Silence of the Studio 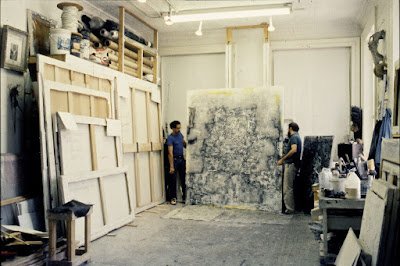 Jack Whitten in his studio (1989).
"Art is the record of a process both material and intellectual, so it’s surprising how few of its practitioners have left thorough written accounts of their efforts. Maybe that’s because the doing and the thinking are more loosely related than one would imagine—sometimes coordinated, but often out of sync. Even with the greatest artists, ideas can be well ahead of practice, as I was recently reminded when rereading Eugène Delacroix’s journals: He often seemed to be working out on the page what he would achieve on the canvas only years later. Yet such written reflections should be precious to anyone who hopes to better understand the process of art. When artists examine their own motives and chronicle their own struggles, they uncover something essential: art as a means to self-awareness. Last year saw the publication of a book that could well turn out to be a future classic of art writing. Jack Whitten’s Notes From the Woodshed was released just a few months after the painter’s death in New York at the age of 78. ..."
The Nation