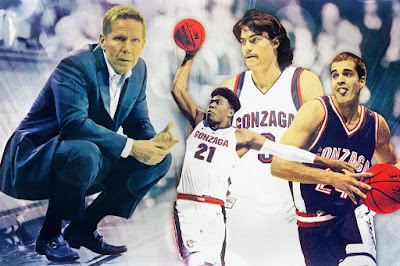 "There were few surprises during the first two rounds of the NCAA tournament. The Sweet 16 features 14 of the field’s top 16 seeds, including no. 1 seed Gonzaga, which advanced to the second weekend for the fifth consecutive year. The Bulldogs are at home in the company of traditional power programs like Duke, North Carolina, and Kentucky, but that wasn’t the case 20 years ago, when the Jesuit university from Spokane, Washington, first captured the nation’s imagination during a surprise run to the Elite Eight. Since 1999, Gonzaga has become a March Madness mainstay, rising from a mid-major to a bona fide blue blood. During that span, the Bulldogs have reached 10 Sweet 16s, three Elite Eights, and one Final Four and have as many first-team All-Americans as UCLA or Michigan State. ..."
The Ringer
The Ringer: The Entire NCAA Tournament Field Now Has the Blueprint to Stop Duke

2019 March: A Handy Guide for Filling Out Your March Madness Bracket
Posted by Bill at 1:13 PM