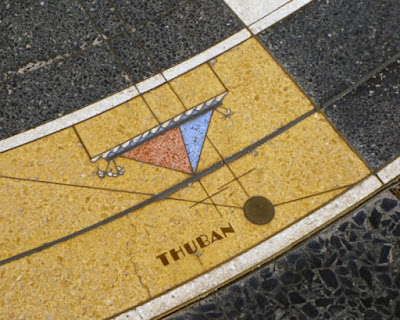 Markings on the floor showing that Thuban was the North Star for the ancient Egyptians at the time of the Great Pyramids.
"On the western flank of the Hoover Dam stands a little-understood monument, commissioned by the US Bureau of Reclamation when construction of the dam began in 01931. The most noticeable parts of this corner of the dam, now known as Monument Plaza, are the massive winged bronze sculptures and central flagpole which are often photographed by visitors. The most amazing feature of this plaza, however, is under their feet as they take those pictures. The plaza’s terrazzo floor is actually a celestial map that marks the time of the dam’s creation based on the 25,772-year axial precession of the earth. I was particularly interested in this monument because this axial precession is also the slowest cycle that we track in Long Now’s 10,000 Year Clock. Strangely, little to no documentation of this installation seemed to be available, except for a few vacation pictures on Flickr. So the last time I was in Las Vegas, I made a special trip out to Hoover Dam to see if I could learn more about this obscure 26,000-year monument. ..."
The Long Now Foundation
The Long Now Foundation: About - Stewart Brand 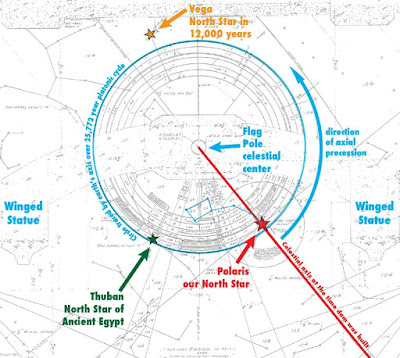 Description overlaid on the original technical drawing for the layout of terrazzo floor.