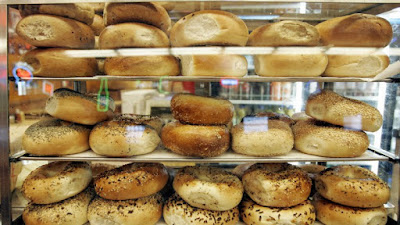 "Today it’s a breakfast staple, but as recently as 1960, The New York Times had to define it for readers—as 'an unsweetened doughnut with rigor mortis.' That’s right, this episode is all about the bagel, that shiny, ring-shaped, surprisingly dense bread that makes the perfect platform for cream cheese and lox. Where did it come from? Can you get a decent bagel outside New York City? And what does it have in common with the folding ping-pong table? Come get your hot, fresh bagel science and history here! Though the bagel is most closely associated with the American Jewish community, its actual origins in eastern Europe have become the stuff of myth. Competing tales offer explanations as to how, as early as the 1600s, Jews in Poland came to relish the bagel at childbirths, celebrations, and funerals. ..."
The Atlantic (Audio)
The Atlantic: The Secret History of Bagels