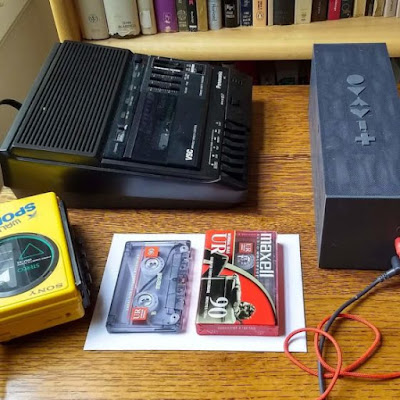 "Another little weekend project straight out of any Electronic Music 101 textbook: make a tape loop with an old cassette. I’d never done this before. The cassette tape is from an old batch of unused 90-minute Maxells I have on hand. The loop was recorded on a Panasonic Standard Cassette Transcriber RR-830, a relic of when I’d record interviews on physical cassette and then transcribe from those cassettes. That Panasonic device has a foot pedal, which used to make the start/stop process of transcription a tiny bit more bearable, especially because it can micro-rewind an adjustable amount with each pause. ... And if you want to try it out, the tape-oriented musician who goes by the name Amulets has a helpful video on YouTube. There’s also a good tutorial at instructables.com."
Disquiet (Video)