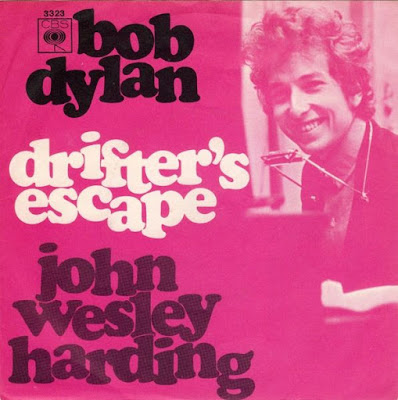 Wikipedia - "'Drifter's Escape' is a song written by Bob Dylan that he recorded for his 1967 album John Wesley Harding. Columbia Records released it as a single in the US and the UK in 1969 as the B-side to 'I Threw It All Away'. The song was recorded in four takes on October 17, 1967. CBS Records International also issued the song paired with 'John Wesley Harding' in some markets. Dylan wrote 'Drifter's Escape' on a train in New York while traveling to the first session for the John Wesley Harding album. The lyrics provide a Kafka-esque narrative in which an outsider is oppressed by society, but not defeated. The protagonist is put on trial without knowing what the charges against him are. The judge is sympathetic, but powerless. The jury finds the protagonist guilty, but he is saved through divine intervention when the courthouse is struck by lightning. The protagonist is able to escape as his persecutors fall to their knees in prayer. Dylan leaves the orientation of the protagonist and the deus ex machina ambiguous. The protagonist could be a prophet freed by God, or he could be a false prophet freed by the devil. Several commentators have pointed to parallels between the song's story and Dylan's own experiences around the time he wrote the song. The drifter does not understand the charges against him, just as Dylan did not understand the criticism he received for moving from folk music to rock music. ..."
Wikipedia
W - John Wesley Harding (song)
Bob Dylan: Drifter’s Escape, John Wesley Harding
whosampled: Drifter's Escape
DailyMotion: John Wesley Harding
Posted by Bill at 2:44 PM