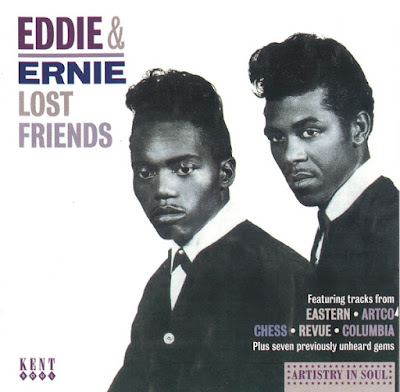 "Eddie & Ernie's discography is quite a diaspora, spanning about a decade, 15 singles, almost as many labels, and some releases under names other than Eddie & Ernie. This CD does an admirable job of pulling together 24 tracks (seven of them previously unissued) from their disperse output, forming a good though not great collection of punchy period soul with good harmonizing. It doesn't matter a great deal, but a few of the cuts weren't billed to Eddie & Ernie: there's a 1963 Eddie & Ernie single, both sides of a 1967 single by Ernie Johnson, one side of a 1967 45 by Eddie Campbell, a 1964 side they did under the name the New Bloods, a previously unreleased early-'70s number by their early-'70s group Phoenix Express, and a 1962 single by Little Worley and the Drops on which the pair sang backup. Unsurprisingly, the stylistic range is wide enough that it's difficult to summarize. Eddie & Ernie sang deep soul-styled songs that might appeal to fans of Sam & Dave, but they also did some lusher, poppier close-harmonized duos that wouldn't have been alien to the studios of Detroit, Chicago, or Philadelphia. ..."
allmusic
Holland Tunnel Dive
amazon
YouTube: Bullets Don't Have Eyes, I'm a Young Man, I'm Going for Myself, Lost Friends, We try harder, Outcast
Posted by Bill at 2:42 PM