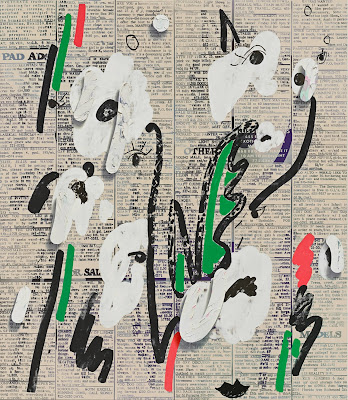 “Untitled” (2013)
"A new self-awareness entered painting toward the end of the 20th century, which initiated an irreverent, sometimes but not always loving interrogation of the medium. Artists of several generations and many stripes pushed this approach forward, ransacking painting’s history and conventions, examining it as both a commodity and an object in space, toying with its taboos and its pursuit of a signature style. One of the most innovative explorers of this vanguard has been Laura Owens, the subject of a jubilant, chameleonic midcareer survey now on view at the Whitney Museum of American Art. Ms. Owens loves painting but she approaches it with a rare combination of sincerity and irony. Distinguished by a sly, comedic beauty, her work has a playful, knowing, almost-Rococo lightness of being in which pleasure, humor, intelligence and a seductive sense of usually high color mingle freely. ..."
NY Times
New Yorker: The Radical Paintings of Laura Owens
YouTube: Laura Owens: Hugo Boss Prize 2016 Nominee