Living Well Is the Best Revenge By Calvin Tomkins 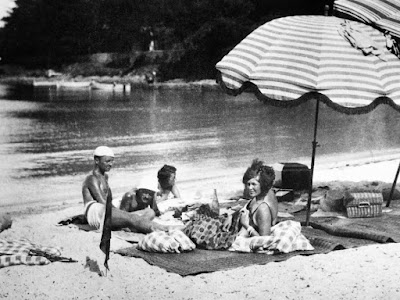 Gerald and Sara Murphy with friends at a beach in the French Riviera, late 1920s.
(July 28, 1962) "A writer like F. Scott Fitzgerald, whose life can almost be said to have attracted more attention than his work, may have to wait a long time before his literary reputation finds its true level. Although 'Tender Is the Night,' the novel Fitzgerald liked best of the four he published during his lifetime, was generally considered a failure when it first appeared (even by Fitzgerald, who tried to improve its standing by writing a revised version that nearly everybody agreed was much worse), it has been quietly assuming, over the years, something like the status of an American classic. Sales in the past twelve months exceeded five hundred and fifty thousand copies, or about forty-five times the sale of the original edition. The book, which was out of print when Fitzgerald died, in 1940, is now available in four editions, and is required reading in a large number of college courses in American literature. ..."
New Yorker