Do the Bacteria That Raise Sourdough Come From Bakers' Hands? 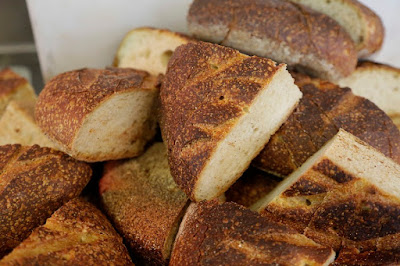 "Think about the taste of sourdough. That distinctive tang is the work of microbes used in baking the bread—a 'starter culture' of wild yeast strains and bacteria that fill the loafs with sour acids. Unlike industrially-made white loaves, which are baked using yeasts that date back just 150 years, the microbes in sourdough cultures have been used since ancient times. That’s why the food journalist Michael Pollan once described sourdough as 'the proper way to make bread.' The acids produced by those microbes have another purported benefit. According to The Guardian, they 'slow down the rate at which glucose is released into the blood-stream.' In other words, it has a low glycemic index, making it, as the Globe and Mail advises, 'a good choice for anyone managing their blood glucose levels,' such as diabetics. ..."
The Atlantic
W - Sourdough
What Makes San Francisco Sourdough Unique? (Video)
Posted by Bill at 1:00 PM