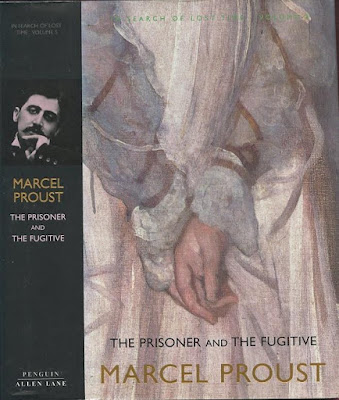 Wikipedia - "Volume Five: The Prisoner. The Narrator is living with Albertine in his family's apartment, to Françoise's distrust and his absent mother's chagrin. He marvels that he has come to possess her, but has grown bored with her. He mostly stays home, but has enlisted Andrée to report on Albertine's whereabouts, as his jealousy remains. ... Volume Six: The Fugitive. The Narrator is anguished at Albertine's departure and absence. He dispatches Saint-Loup to convince her aunt Mme Bontemps to send her back, but Albertine insists the Narrator should ask, and she will gladly return. The Narrator lies and replies he is done with her, but she just agrees with him. He writes to her that he will marry Andrée, then hears from Saint-Loup of the failure of his mission to the aunt. Desperate, he begs Albertine to return, but receives word: she has died in a riding accident. ..."
W - In Search of Lost Time
The 14-Minute Marcel Proust
amazon