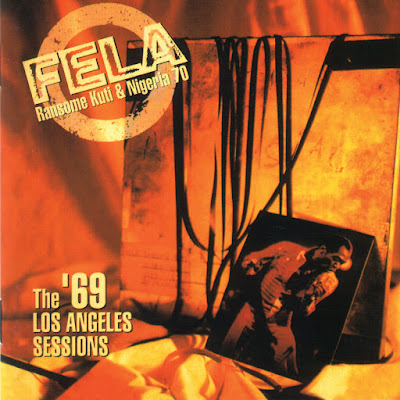 "A new reissue that unearths a series of previously unreleased sides recorded between 1964 and 1968 with Fela's first band, Koola Lobitos. These songs are steeped in the style of highlife jazz that was popular in African clubs, a fiery hybrid of Latin jazz, rhythm and blues, even calypso. With most of the vocals sung in his native Nigerian, the music is bubbling over with punchy brass arrangements, simmering percussion, and bass grooves that mortar the sound. Highlights include an ode to Nigerian nightlife, 'Highlife Time,' and 'Omuti Tide,' with Fela's tongue-in-cheek phrasing of 'When the Saints Go Marching In' during his trumpet solo. The '69 L.A. Sessions find Fela & Nigeria '70 fleshing out the sound that would bring him acclaim and popularity. Ensconced in the knowledge of the American black struggle of the time from a female companion in Los Angeles, his approach went from bright and snappy to contemplative and hypnotic without compromising the groove. ..."
allmusic
Discogs
amazon
YouTube: The '69 Los Angeles Sessions
Posted by Bill at 1:56 PM