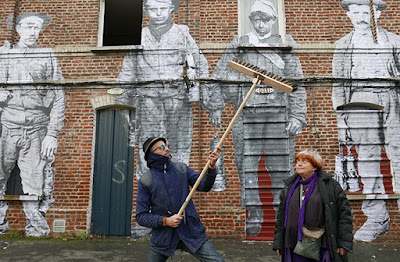 "The French filmmaker Agnès Varda, whose movie 'Faces Places' is up for Best Documentary tonight, is not only the oldest Oscar nominee in history; she is also older than the Oscars themselves. She was born, in Brussels, in May of 1928, a year to the month before the Academy of Motion Picture Arts and Sciences held its first awards ceremony, and made her first film, 'La Pointe Courte,' at the age of twenty-seven. Aside from her previous work as a photographer, she had no formal training in cinema. 'La Pointe Courte' later earned Varda the nickname Grandmother of the New Wave—a slightly strange distinction, since she was born only a couple of years before other pioneers of the movement, like her husband, Jacques Demy, or her friend Jean-Luc Godard, who was twenty-nine when 'Breathless' came out, in 1960. But Varda got there first. ..."
New Yorker: Agnès Varda Is Still Going Places
W - Faces Places
Agnès Varda and JR Talk Aging, Faces Places, and Road Trips Over Afternoon Tea
YouTube: Faces Places - Official US Trailer (HD)