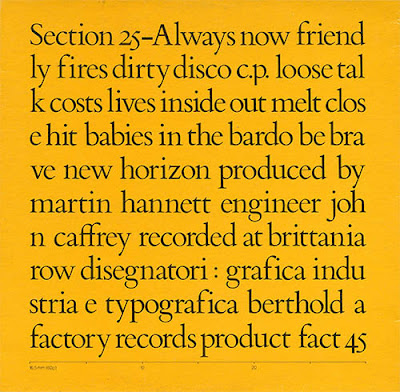 FACT 45, Always Now, Sep 1981
"Peter Saville was born in Manchester on 9 Oct 1955 and later studied graphic design at Manchester Polytechnic. After meeting the Grenada TV presenter Tony Wilson at a 'very, very bad Patti Smith gig in late 77 or early 78,' he was commissioned, at age 23, to design a poster for Wilson’s new club - The Factory. The poster, which in typical Saville fashion arrived too late, was not based on the prevailing punk aesthetic but on Jan Tschichold’s Die Neue Typographie. As he later stated 'I found Tschichold’s elegantly ordered aesthetic more appealing than the anarchic style of punk graphics. I found a parallel in it for the New Wave that was evolving out of Punk.' In 1978 Wilson, along with Saville, unemployed actor Tony Erasmus, producer Martin Hannett and band manager Rob Gretton created Factory Records. The chaotic, quixotic and now legendary label set up operations in Erasmus’ home on Palantine Road in Manchester. Because no one had any idea what they were doing, Saville was given a remarkably wide latitude in design. ..."
codex99